So, what is the usage/availability policy on supplies (I.E. wood, electronic parts, etc) that is either untagged or tagged with expired tags? I’d love to use bits of things here but I don’t want to use some thing I should not.

I’m not certain about all of the supplies in the space, but I do know if it is tagged (even with an expired tag), it is someone’s personal item and should not be used.

@MacieS ieS, Thank you for at least replying, nobody else has yet and that’s kinda frustrating as I’d expect this topic to at least spark more interest than it’s gotten. My primary purpose behind my post was to get some discussion happening that could lead to the formation of an actual policy because I’m not sure there IS one. And NOT having a policy on this is worse than having an unclear policy.

For the most part, I agree with your thoughts on my question but there is a point where it gets really muddy. We’re not suppose to be storing supplies here, that was told to me during new member orientation, but we also have a space to store our stuff that we do need. Our tags have expiration dates on them, which means they are not intended to last indefinitely. At the same time, basic respect for our fellow crafters pretty much dictates that we honor those tags for at least some amount of time after they expire. We have items though that are way outside those bounds. For example, we have pieces of wood that are not in or near enough to the member’s storage area to be considered “grouped” and have tags that expired over a year ago. Should those tags still be respected even though they are clearly in violation of the “do not store supplies” policy? Should they be thrown out and not allowed to be used? Should they be considered fair game? If we do not indefinitely respect those tags, what point is it “too far” past expiration?

These questions don’t have answers and I think they need them BEFORE someone crosses a line because of differing opinions of what’s proper. Very soon, the member storage area is going to be moved and the area is a mess because too much stuff has been left behind. We’ve got a member who’s missing some supplies who might not be missing them if there was a clear policy and the policy was being enforced. (A lot less room for misunderstanding.) We can’t organize the wood area because over half the wood is tagged but about half of what IS tagged is expired so we don’t know what to do with it. We’ve also got a policy that if we use up a communal supply, we’re suppose to replace it, but what ARE the communal supplies we want to regularly stock and what are the supplies that we just happen to have and don’t mind if they are not replaced? (I’m guessing the Area Manager should be involved in the question about stock.) These things make having a policy pertinent and something that probably should be addressed sooner rather than latter.

This space available is finite not infinite therefore each member should be and take responsibility to maintain that which they may have at the space. To that policies are in place already they have just not been enforced. Who wants to be the bad guy that enforces? We are all adults here and should understand responsibility. At home mom and dad enforced policy at you lived in the kingdom of mom and dad they provided rules and enforced them. How many left home cause they wanted not have someone telling them what and when to do something.
Bottom line if you have excess material stored at LMN space get it taken care of. Otherwise Mom is going to clean house.
I am a member just like you and we can have a space to be proud of and people will want to be there. Jump in do your part to rock the world we call Lansing Makers Space. Together we are strongest.

This thread is going nowhere that I had hopped it would and I am getting the impression that I somehow managed to paint myself as a bad guy here. I had no malice, ill intent, or even disrespect when I started this thread. I was simply after a clear understanding that could be shared by all of us or the start down the road towards it if such a thing did not yet exist.

Since this thread is not serving the purpose for which it was created, I am requesting that someone with the authority to do so lock this thread.

Ray you are not the bad guy. Sometimes you make a little dust we try clean things. Hang in there you are doing fine.

Your are blessed and highly favoured
Bobby

In the interests of offering up potential policy solutions, one option is to move long-expired tags items (say, 6 months) into a holding area. Then once another couple months go by, the items become untagged and are either donated to the space or tossed.

A variation of this is pretty much what we’re going to be implementing.

Here’s how we’re planning to work our way into this:

Everyone can help by doing their part to keep @MacieS @jody and I from having to get involved with their stuff (don’t let it become expired, keep bin storage tidy, and keep projects moving toward completion or removal).

There are certainly details to work out for a written policy which we’ll work on and there will always be the opportunity for us to entertain exceptions or special circumstances. (For the record, as long as you ask, we’ll almost always say yes.)

I’ll also add that there’s been a lot of talk about this on the Makerspace Organizers Facebook Group lately, and we’re not alone trying to deal with the clutter/storage problem. I saw this tag posted in one of the threads that could be useful (direct and only mildly shaming 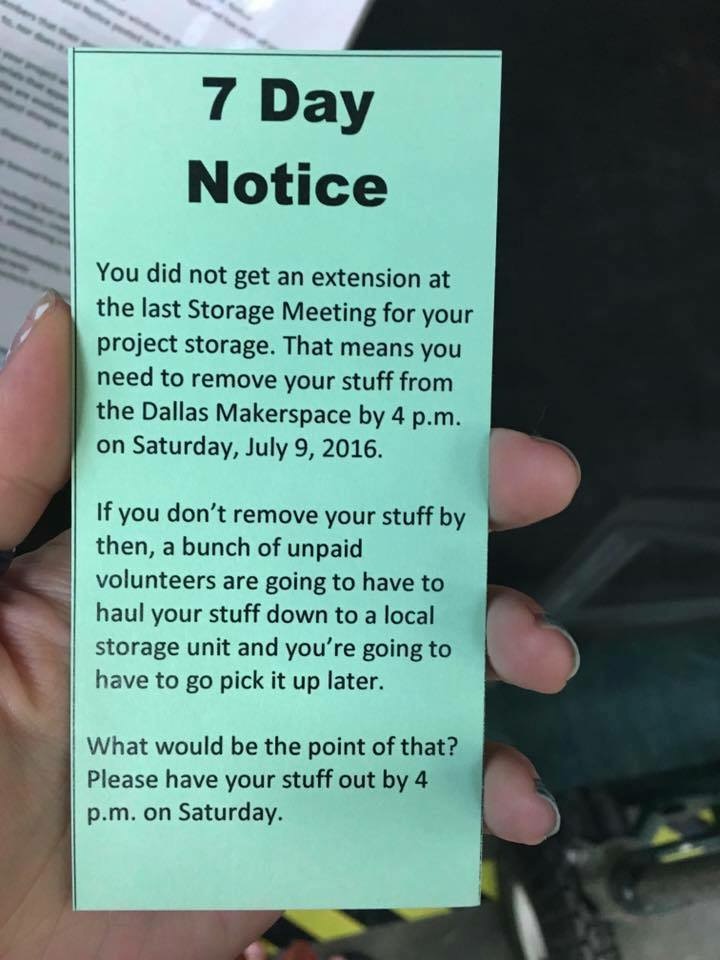 How does storage space work at the makerspace? (Feedback welcome) Infrastructure

Flowcharts are good. Will take this to heart.

@Members, I’ll be sending out emails to everyone who I know has stuff in this pile, but if you see something there, come take care of it! I photographed everything that was put in this pile, and for those things that had a tag or otherwise I knew who’s it was, I’ll be sending out emails tomorrow. I’ve also included the individual shots of things I wasn’t sure who it belonged to. Frankly, we’ve run out of room to continue sorting through stuff collected at the makerspace, so while you totally…

I’m going to go ahead and close this.