So I put this together 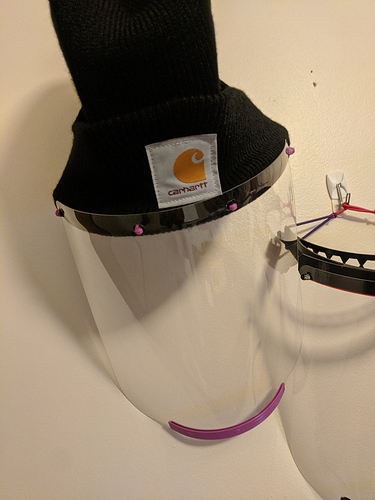 Now that’s a great idea. Honestly beyond this whole COVID problem. I could see me wearing that for some things around the shop.

It just happened by accident too. I was trying to figure out how to attach a second shield on on the same posts but rotated 180* to cover the forehead opening. and I remembered the hats from that laser engraver project i attempted and it just clicked.

Its exciting because that thin head band is not that comfortable. putting it in the hat fixes multiple problems while making it comfortable. Now the forehead opening is blocked and the hat takes the edge off while holding it in place well and this batch isn’t a waste.

It’s not something for widespread adoption but it does make it comfortable.

Awesome idea from an awesome maker!

This is an amazing idea. James, you’ve really been nailing these designs.