Hey all, I wanted to give everyone an update and an idea of where we’re headed with all the work that’s been going on in the shop spaces lately. This will likely be long, so apologies right away for that, but people often ask how they can help and I figure communicating the game plan might help members who want to be more involved with these projects know where they might help. Much of this will be a bit of a brain dump, so hopefully that’s not too annoying.

We’ve spent the last few weeks focused pretty hard on getting the planer / jointer online and getting some better flow / space layout going in the woodshop. We’ve made some great progress, and there’s a few things that are still on the immediate docket like:

The woodshop has seen a fair amount of money being spent on it of late to get everything put together and arranged, and some of the upcoming items require some bigger ticket purchases to do them right or are more of a “wishlist” style upgrade rather than a strictly necessary one. One of the ways we’ve fund-raised in the past for bigger ticket items (like the laser cutter) is to ask for a 50% match in donations. This does two things: helps defray some of the cost to help our money go further, and help ensure that we’re making upgrades that have the support of the membership. Some things that may likely see a fund-raising pitch along these lines coming up:

We very well may decide that something like the dust collector upgrade should come out of the equipment fund since the safety and comfort issues make it more of a “we should just do this” sort of thing.

Now, all of this said, it’s probably time to shift our focus away from the woodshop for a bit since it’s in a much more functional state and move on to other areas that need some attention. The next on my priority list would be the machine shop consolidation and flex space (same area). Our plans for that area include:

You might also be wondering “What the heck is this “flex space” people keep talking about?”
. 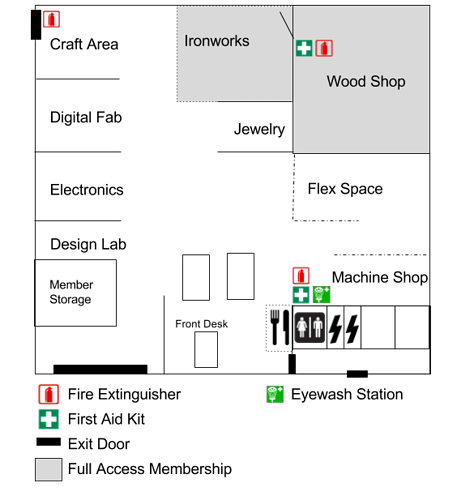 The goal behind the flex space is to relieve some space constraints in the woodshop by creating some “woodshop adjacent” work surfaces and give the machines a little more breathing room in the wood shop so members can work concurrently without bumping into each other as much. It will also function as general workspace, hence “flex space” and not “woodshop annex” or the like.

The idea is a couple of work benches, hand tools, clamps, drill drivers, etc. Anything that generates sawdust (power sanding, etc) would ideally stay in the woodshop so it would be great to build a downdraft table or something to make that work better and cleaner.

I think that’s my immediate brain dump of where we’re trying to head. We’ve been doing a good job of incrementally moving things forward one day/weekend at a time rather than trying to organize “work days” (which add quite a bit of stress to the whole thing for those of us planning things and don’t /usually/ end up resulting in a whole lot larger workforce… which generally means less gets accomplished overall and a few people are really burnt out from the whole exercise). I know this method makes it harder for people who want to jump in to do so since it’s less structured, and I’m open to suggestions for other ideas.

Maybe the thing to suggest right now, is if you’re interested in helping, post a message along the lines of “Hey, I’m thinking of coming in on X day at Y time, what can I do?” Then maybe we can either apply some offline direction or one of us who’s got the “playbook” (metaphorically) in hand can come in too (since it’s more fun to come in when you know you’ll have help).

Last, (and probably more appropriately first, but hey–brain dump) is THANK YOU to everyone who’s been helping out and using the space the last few months. Nov/Dec was probably the busiest I’ve seen the spae since it started and also the /cleanest/ I’ve seen the woodshop on a regular basis. I offer a heartfelt thank you to everyone who has taken our “Leave it better than you found it” motto to heart. Our cutting board class this last weekend went the smoothest out of all of them so far, largely because we didn’t have to spend our time getting the shop ready for them.

Thanks to those who took the time to read.