Mego games or a table at DemoCamp this Wedneday. Anyone able to help?

We have a last minute request from DemoCamp to bring the Mega games this Wednesday night. Is anyone willing/able to bring the games out there and talk about what LMN does?

Alternatively , and perhaps more realistically is anyone able to table the event and represent us there that way?

Let me know and I’ll get you Erik’s contact info to work out the details.

Update: I am free that evening; I can be there at DemoCamp.

I just realize something - I do not have a vehicle large enough to bring over a MegaGame… sooo, I can man the table, but I cannot cart over a game.

No worries. Let’s just do flyers and maybe some showcase stuff then. Thanks very much for being willing to do this! I’ll pull some stuff together tonight and put you in touch with Erik to get details on getting in and everything.

It would be super great if a @BoardMembers were able to attend as well, but I do understand this is a last minute request.

I will be there, but I was planning on being a spectator… I’ll spend some time at the table.

I do not have the time tomorrow to load or unload anything, I have cardio rehab right up until the start of this event.

We could bring some small things that are not mega games. Cutting boards, laser cut stuff, 3d printed stuff.

Great Idea, @zimmer62 . I’ll be stopping in at about 4:30pm this afternoon to get whatever small items to display, plus pamphlets and paper paraphernalia for DemoCamp. Thank you in advance for stopping in at the table tonight, Joe!

There is a bin with your name on it on the main tables. I put flyers and some project samples and such in there. Feel free to add anything you like to it.

Great… stopping over in about 20ish minutes to pick this up.

@michael had brought over Gigantris and Mega Operation whilst I had brought the smaller samples and and LMN information and set up the table. We had people visit the table, asking questions about the tools at the space, the types of memberships available. There was also some interest in people wanting to visit the Makerspace during open hours on either Wednesdays or Saturdays. @zimmer62 and I fielded questions… and in the end, one actually turned her interest card with her e-mail re: classes and membership. 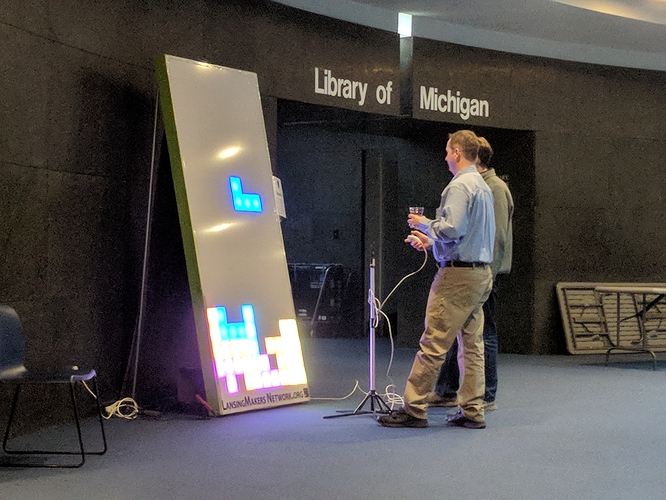 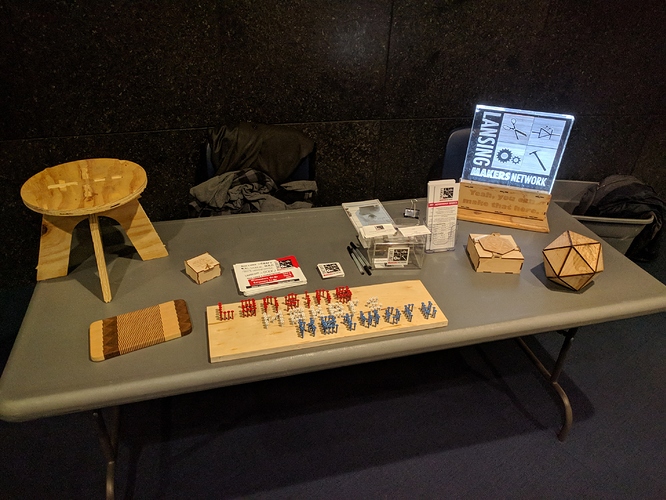 @Lou and @quetwo were in attendance as well. The presentations were engaging - some highlights being Brian Winn and the Games Developers Program presenting a 12-person pirate game called Plunder Panic, speakers in hula hoops (yes, Joe, I missed the hula hoops), a really neat “area experience” site for those with disabilities called AbleEyes.

Overall, the games, our table, and LMN in general were positively received.

P.S. There was a raffle for those in attendance (names chosen by a generator app developed by one of the past attendants) - Lou and I ended up with two of the prizes.