I picked up a couple of the smart bulbs that Costco sells when we went in to get our rations: 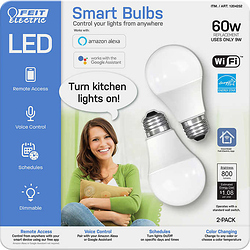 I figured I’d see if they’d be able to integrate with home assistant and if they weren’t they were cheap enough that it wouldn’t be the end of the world. But, it turned out they were much cooler than I thought!

It turns out there’s a company in China called Tuya (if you’re a HA person, you’ve probably heard of them) that not only makes their own bulbs/smart devices using ESP8266 chips, but they also white label for any company at next to nothing. So many of the smart wifi devices you find are actually made by this company under the hood. Well, there’s this cool little collection of scripts call Tuya-Convert that uses a vulnerability in the Tuya firmware to allow you to upload your own binary using the OTA process… like Tasmota.

The instructions are pretty easy, but it did take me a couple of tries and a couple of wifi adapters to get it to work (in my experience, if it doesn’t work, reboot and try again). You can use a Raspberry PI to do the exploit, or since I didn’t have another PI handy I created an ubuntu VM on my PC and passed the USB wifi adapter through to the VM.

It’ll make you feel like a hacker and you get the 100% awesome that is Tasmota.

If you’re into the home automation stuff and find yourself having to go into Costco during this stay at home order you might find them worth a play.

Thanks… if we do end up at costco during all of this I know I’ll be buying one of these.

I have too many 8266’s at this point. I think I might make some network changes so that all of my IOT devices are a bit more segregated from my network.