Replacing the thermistor didn’t solve my problem. After replacing it I ran a first layer calibration that came out pretty good. Then I started a long run that looked OK for a while, but really failed after about 4 hours in. The printer stopped with another MINTEMP error. The photos show a Swiss cheese result. And looking closely at the support pillars, they looked bad from the beginning.

I’m assuming it’s still a temperature problem. Could it be the heater element? Controller board? 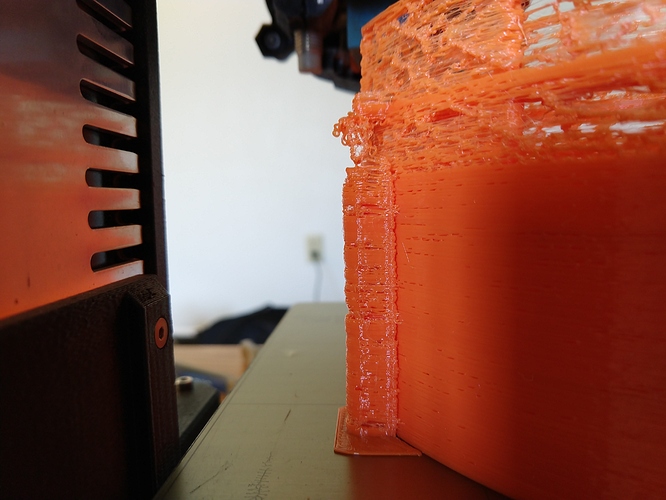 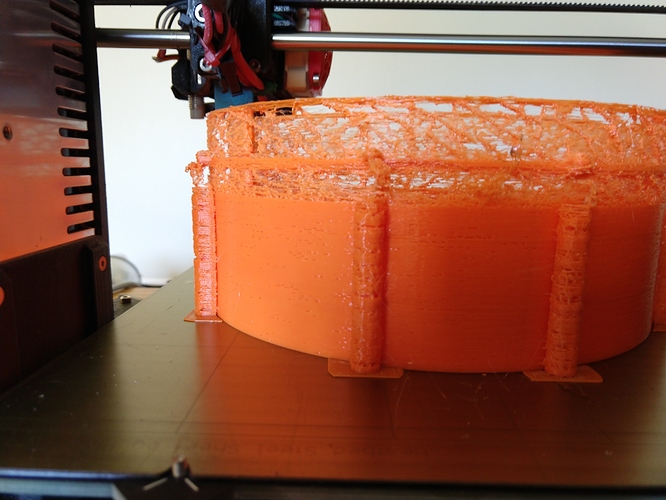 When I replaced the thermistor I added a silicone sock over the nozzle, but don’t think that caused any trouble.

I’ve seen that error after the printer stopped for a different reason. (non temp reason) The way it’s coming out, it very well could be a clogged nozzle.

However, have you watched the temp’s while it’s having these problems?

I wasn’t able to loosen the nozzle with reasonable force. It was at 280c but it wouldn’t budge.

I’ll try some cold pulls and see what comes out.

Maybe it was a clog. I did several cold pulls and some poking up the nozzle with a guitar string. I finally got a nice clean calibration cube print.

And now I’m getting “MINTEMP Bed”.

I can’t imagine how printing could continue with such small amounts of material coming out of the nozzle. Usually a clog that severe would cause grinding and that would stop the print.

Do you see correct bed temps on the LCD?

I would check continuity from bed thermistor to the controller board if that is still a problem. 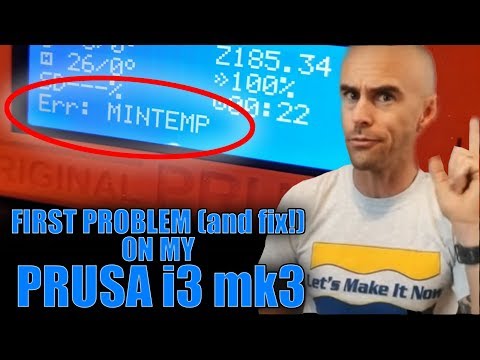 I think I have it figured out. There was a nozzle clog that I cleared up. It was printing well, except that every so often I’d get a big blob of scorched plastic appearing on the print out of nowhere. Sometimes it was big enough to cause the printer to stop with a “Crash detected” message.

I noticed that plastic was building around the base of the nozzle. Finally I realized that the plastic is seeping through the threads of the nozzle. I must have loosened it when I tried and failed to remove it.

Last night I ran a long job, and paused every half hour or so to clean up the nozzle. The print came out fine. So now I need to take the head apart and clean it all up and re-tighten it all down. Scary.

Don’t forget to check the P.I.N.D.A. probe height as that will change relative to the nozzle if the nozzle is tightened or loosened.

I think I got it. You can see there was a lot of plastic seeping around the whole heater block. I took the hot end apart and cleaned everything and tightened down the nozzle properly. After some test prints there’s no sign of oozing plastic.

It’s quite a chore to do that. I was quite happy to end up with no screws missing or left over. 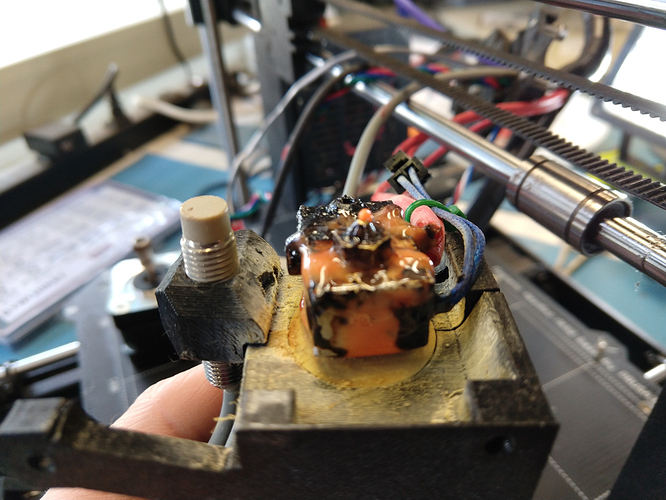 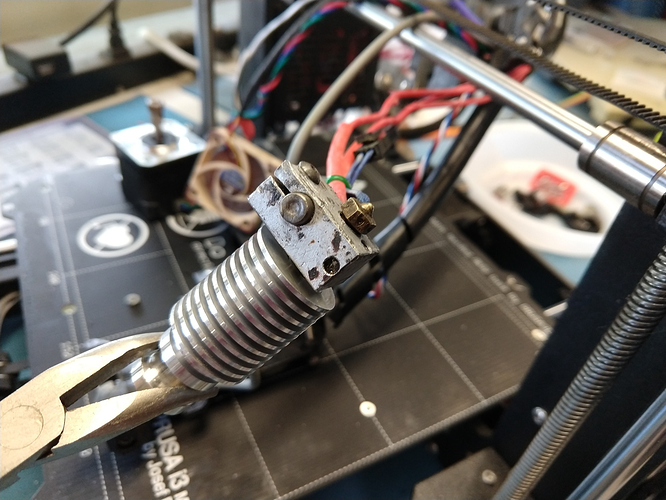 I continued to have trouble with the 3D printer. A “MINTEMP” error would show up intermittently with the original thermistor, and with a replacement I bought. Then I got a pair of used, working, hot ends from @DrN8PhD from the MSU face shield printing group, and transplanted one of them.

At first it looked good, but after about 3 hours of printing I got another MINTEMP error. Luckily that happened right after finishing the second in a stack of face shields, so I had two usable ones with only a layer or two of wasted plastic.

But now it’s clear the problem probably isn’t the thermistor itself or the cable. I thought it might be bad soldering on the PCB connector, so I opened up the box and got the board out. It looked fine, but I touched up the joints on the connector anyway. It’s lead-free solder, which is not as fun to work with. I put it all back together, but then I got a quick MINTEMP error. At least it was quick.

Then I wondered what else it could be. Firmware? There happened to be a new version of the firmware for the printer released on May 19. And the release notes mentioned that a couple of MINTEMP issues were fixed. Aha! While I was downloading and installing, I read further and saw that the fix was that when you get a MINTEMP error, it now tells you which thermistor is the problem. Which was a headslapping moment. There are two thermistors; one in the nozzle and one under the bed. I had been assuming that it was the one in the head. Has it been the other one all along?

After the update and starting a test print, I soon got an error, but this time it said “MINTEMP bed”. So it was the bed thermistor after all. It’s mounted under the bed with a big piece of Kapton tape. I wiggled out its cable and found a definitely dodgy section under the bed. Rather than patch the cable, and risk goofing up the thermistor (the heated bed and thermistor are sold as an assembly, for $85.00), I opted to just tape down the loose cable under the bed with some more Kapton.

For the moment, that seems to have fixed it. I’ve been printing for several hours and things look great. The nozzle isn’t leaking, and for now MINTEMP has been kept at bay.

Of course I realize that by writing all this down and clicking “Reply” in a moment, I will be jinxing the whole thing. I accept the risk.

Hurray!
Hopefully you have found the culprit.

The silver lining is that now you have more knowledge about the MK3 than you ever wanted to have and also that you have some spare parts and some idea of where to get more if needed. Oh, yes, and now the machine has improved firmware.