During the shutdown, I have custody of LMN’s Prusa MK3 printer. I’ve been making face shield parts as part of the MSU/LMN effort, and pushing it pretty hard. It’s been a champ, but yesterday a problem surfaced.

The extruder is putting out just a thin wisp of filament, measuring about 0.25mm (it has a 0.4mm nozzle). It doesn’t adhere to the bed because it’s so thin.

I have tried the “cold pull” several times, following Prusa’s instructions. This involves heating the nozzle pretty hot, manually pushing lots of filament through, letting it cool, and yanking it out. It looked like I was getting some contamination out that way. But that didn’t fix it.

I think it might be the feed mechanism. When I push filament by hand, it comes out pretty thick. But it’s still a thin wisp when operating.

I don’t have a Prusa but I have had lots of 3D printing problems. This PPE printing is really putting 3D printers to the test and exposing the problems we didn’t know about!
When you extrude filament above the bed, does it come out straight or does it curve right out of the nozzle? If it isn’t straight you might have a blockage.
One thing to try with unclogging the nozzle: I have had good luck using a guitar string and running it through the nozzle to remove any debris. Guitar string is thin enough for my .3 nozzle (I am also fortunate that my mom is a guitar player so I can have the broken strings

)
Another thing that has caused me problems is the teeth on the hobbed gear that drives the filament get packed with filament particles and doesn’t have enough grip to push the filament.

Filament comes straight down. I may have a guitar string. My needles and electrical wire are all too big.

An acupuncture needle was included in the kit, I think. Maybe that is still around somewhere in the space?

I have used a wire pulled from a wire brush for that purpose before. Be careful if you use hardened steel. Prusa wants you to heat the nozzle to printing temp, insert the acupuncture needle from below and do a Load Filament. Repeat if necessary. I think the idea here is that the needle will cool down the filament a bit and it will carry out impurities as it extrudes.

It does sound like a feed problem, however. Pushing the filament by hand at temperature will pretty much indicate that there is not a blockage unless you have to use undue force.

As @Rhett said, check for particles in the filament gripping area. I think that machine has a Bondtech system which usually works very well but check there for grinding. That could happen if pushing the machine to the limit.

Another idea would be a cold pull with different plastic.

I got the printer running again. I realize I neglected to mention a few details in my earlier message. On Tuesday the printer display started show random characters all over while printing, then reverting to normal, then random characters. Then it would randomly stop during a print. I call this “flipping out”. So I figured I would re-flash the firmware.

That cured the flip-out, but it didn’t occur to me that the first layer height setting would be lost. After readjusting that last night, I got it back in business. I still need to tweak it, but the printer is working.

I’ve been running it many hours a day printing headbands, and until Tuesday, it gave no trouble. I think it was just a case of a corrupted program, now cured by re-flashing.

Thanks for the help!

Glad you got it working! 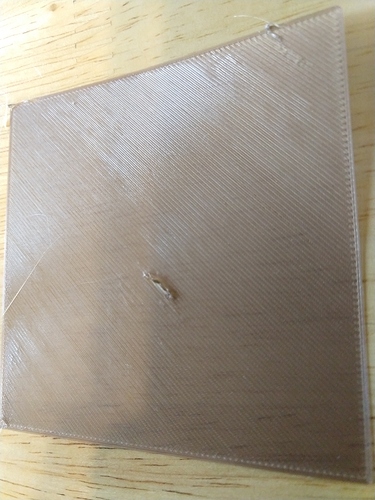 I’ve been tuning 1st layer height all day. I think it’s good now. The photo is 80mm square, and looks good except for a few boo boos. Maybe just filament problems there.

Now I’m getting the dreaded “Err: PRINT FAN ERROR” error. There’s loose wires on the front fan. When the head moves to the left side of the bed, it cuts out. When it moves to the right side, it comes back. This looks like a common thing on this printer.

I was able to finish a print yesterday by wiggling the wires, but I couldn’t do a long overnight print.

I’m opening up the wiring harness to have a look.