Big thanks to @RealCarlRaymond, @Rossi.Bossi And Garry for helping with the heavy lifting tonight. We got the planer and jointer moved into place. Jointer has been under power and adjusted and seems to work well. We’ll be working on the planer tomorrow and should hopefully have that working barring unforeseen problems.

We’ll also be getting the SOPs written for both machines tomorrow so that we can start doing checkouts on them. I know some folks are probably itching to get back to work on them so we’ll try to be accommodating to get them scheduled.

This does mean for the moment (hopefully a brief moment) that the woodshop is without a planer as we’ve moved the craftsman out. We’ll still be hanging on to it as a backup for classes and such.

This also meant that the lathe could finally find a home. If anyone wants to tackle making an organizer for all the lathe tools and such that would be epically cool.

Thanks again to everyone who helped this project along over the last couple of weeks. (And a special shout out to @RealCarlRaymond for being the ultimate badass that he is). 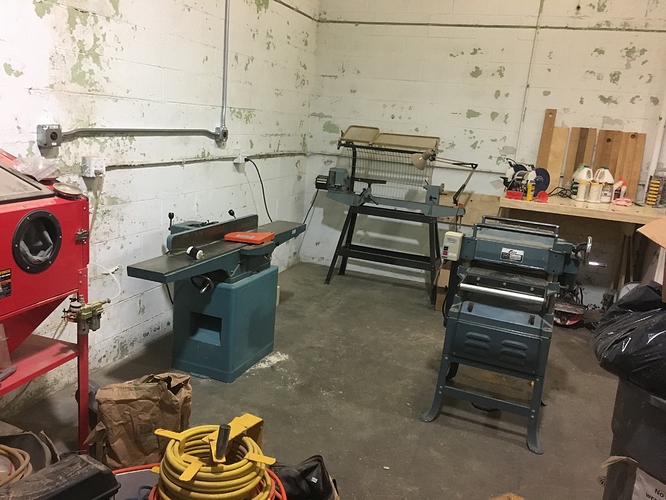 Woohoo!!! Nice job, and the space is less cluttered now!

KAnother update: we got the planer under power and most everything seems in working order. There were a few more maintenance items that needed to be done (draining and replacing the gearbox oil, lots of lubing and cleaning) so getting it up and running took longer than anticipated. We’ve also ordered some replacement parts (nothing critical, just odds and ends that needed replacing).

It’s also LOUD… like crazy loud. Our experience with the craftsman was that when it got crazy loud that was an indication the knives were doing more smacking than cutting. We’ve got replacement knives on the way and we’re going to try giving the current ones a quick hone/cleaning to see if that does the trick. It could also be that it’s just crazy louder than we’re used to. We’ll see what touching up the knives does!

Carl and I are working on the SOPs tonight, so still working on getting this going as quick as we can, just want to keep everyone in the loop.

Just wanted to check: is it possible to do a check-in for these?

We now have the SOP manuals ready, and we can put these machines into service and start doing checkouts on them. Thanks for your patience on this!

These two are big improvements over the smaller machines. They are on separate circuits, and have permanent dust collection hook ups. No more running the Shop Vac cord out the door and into the next county, and no wood chips thrown onto the floor. And they are permanently located on the floor (because they are heavy).

I happy to do the checkout for anyone interested. This will cover both machines. We’ll start with rough cut lumber and make it straight, flat, and square.

I think I can do Tuesday. How long do you think checkout will be?

Around half an hour.

For the curious, here are the links to the SOP:

I will plan on Saturday. Thanks!
Rob

Nice job on the SOP’s they look great!

Based on the location of the jointer and the lathe, I would probably recommend that both not be used at the same time, as it puts the person using the lathe in a vulnerable position to the jointers possible kickback.

It’s a good catch and has been mentioned already. I’m working on signage for the jointer, and I’ll include it there.

I’ll be there tonight I hope

I’ll be there tonight, also. Might be a bit late, though.

This topic was automatically closed 7 days after the last reply. New replies are no longer allowed.