I wanted to start a thread for the Holiday Event on November 30th. I listed a few starter questions below:

What is a make and take?

A make and take is a small project that someone can make and then take home. examples are a small soldering project, a stamped copper name tag.

I’d be happy to lead a jewelry make and take with hand-stamped tags.
I need to think about a blacksmith make and take, maybe some kind of simple ornament (I’m thinking about a birdcage ornament).

I would have the even 10 to 6 with the assumption that the activity would be noon till 4 or 5.
We could have the event be free and change $3 or $5 per ticket where each ticket can be used for one make and take.

We talked about this at the board meeting tonight, particularly about the craft/gift aspect. I would like to lead up promoting the event both to the public and to artists who could sell stuff at the event (assuming 50/50 split on sales between artists and the space).

I am considering whether I can do a make and take on the wood lathe. I have to experiment some more. If not a make and take I could demo and sell what I demo. It feels like we are getting a late start organizing and successfully promoting this event. Opening this event to outside artists further complicates this. How many makers can be accommodated? How much space per artist. Is there a deadline for applying? If we do a weakly run art show, do we jeopardize future similar events?

I am more worried about getting people in the door (including artists showing/selling work) then anything else.

What do people think about these for artist ground rules:

We will be working one-on-one with artists who show, so we can work out details as needed.

Does anyone have any ideas for a name for the event?
“The ‘Get Out Of The House, Check Some Items Off Your Holiday Shopping List and Get In Touch With Your Inner Maker’ Event” is kinda long.

You may recall that during our initial meeting we tentatively spoke about using “How-to Holiday”.

I spoke with Jerry from “How-to Halloween” and he loved the idea. And wants us to us it. He offered to help with some of the promotional material. As we discussed several ideas about keeping a similar Font and such, while yet making sure it had a different feel, so they would not get confused together.

In short I would to see that we move forward with “How-to Holiday”.

I’m not against How-to Holiday. I am concerned that it underplays the arts/crafts for sale - but, short of calling it “holiday crafts show” which would be both boring and downplay the make-and-take aspects I don’t have a better suggestion.

I’m concerned with the idea of making the artists split proceeds 50/50 with the space. That seems high to me. My reasoning is that for many types of art the cost of materials plus time already puts price at a point that feels high to the public. If we ask them to turn over half of that to us they will have to raise prices even higher to make any profit at all or they may just decide we’re not worth the time to participate, especially at this time of year when everyone and their brother is hosting a craft/art fair.

Anyone know what might be a typical set up for this type of thing?

50/50 is reasonable for retail situations. Consider here that there is no risk on the part of the artist (no upfront cost for a booth for example). Since we are handing the promotion for the event and managing the transaction, I think 50% is fair. That being said, we should consider what the goal of selling art is. I have been assuming that we want to generate revenue for the maker space first and promote artists second. If this is not the priority, then it may make sense to take a smaller cut.
I assume that How to Holiday will be a topic of conversation at tonight’s meeting.

I looked into blip.

the way there system works is:

We pick which billboards we want to show on.
We pick and start and end date
We pick what times during each day (of the week) when we want to show.
We set a budget per day

they need 48 hours to approve the artwork, after which we can turn on or off a campaign at any time, and it will pick up right away (I assume within a day).

Here is one idea for an ad I threw together.

Here is a crappy photo of the blacksmith make and take project. 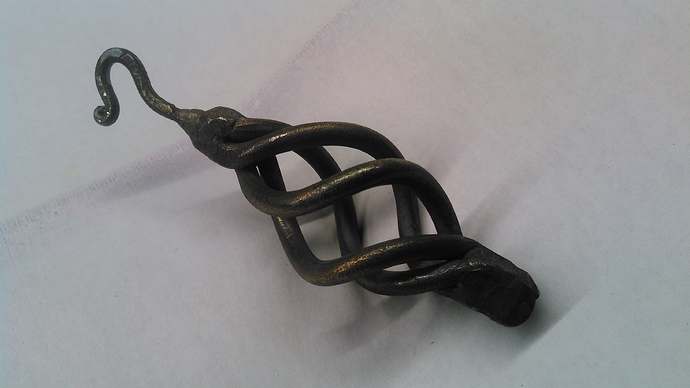 Here’s what we’re currently working with for a postcard. I printed 300 for the How2Holloween. Let me know if anyone has changes before I print a real set (probably with the goal of having them ready when tickets are online). 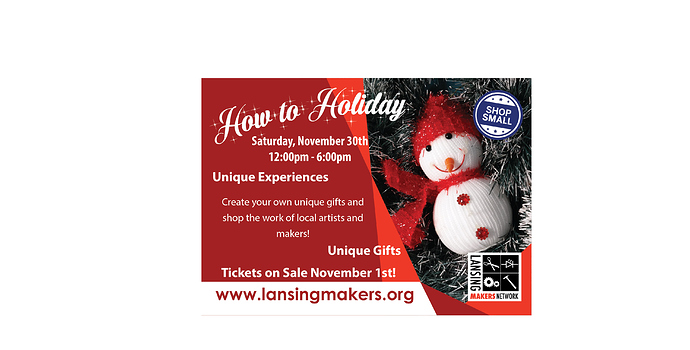 I took a few of these postcards today. Will distribute on campus at a few places.

I would be interested in selling a few of my pieces that I’ve made at LMN during the event and look forward to hearing how this pans out. I’m a little worried that if you split 50/50, then even to recover cost of production+material+LMNtake; I would have to hike up the costs by quite a bit. My two cents.

Heading out of town this Thursday for three weeks, so you won’t see me at the space.
Thank you!

We had a lot of debate about this. At the end, we decided that the purpose of the event was a fundraiser for LMN (and keeping in mind that we don’t usually sell finished products, so this is a new thing for us). Totally understand that makes it difficult to make the math work out as a seller.

We’ll definitely be looking at how this part of the event went in the follow-up discussions after the event. It may be that asking for donations to a silent auction or the like may be a better way to go in the future.

EDIT: Also, thanks for taking some postcards to distribute!

Thank you for explaining. Count me in!! I’m heading out of town tomorrow and will be back on the 14th; will come find you guys after that. I assume someone will update this link as and when the plans finalize? (I’ll keep checking).
Even I’m very interested to see how this turns out!! Hopefully we get a good turn out!! (Distributed the postcards in College of Vet Medicine, MSU Surplus store, and the Veterinary Diagnostic Lab)

Good luck organizing! I can help set up the space before the event

I had a conversation this weekend where I was convinced that my idea regarding pricing at 50/50 may be more appropriate for San Francisco or New York then here in Lansing. 30% to LMN and 70% to the artists was suggested. What are peoples thoughts?

50% is a bite. Even Apple only takes 30%. We will certainly get more artists at the lower rate. If we want to build buzz about LMN, more stuff at a lower house cut might be desirable.

I think 50% sounds like too large a cut. Personally, I’d lean closer to 20%, 30% at most. 50% is what well-established art galleries take, but these are galleries with connections to the art world; they can generally keep a show up for a longer period of time, and can also a) actively sell the work and b) connect the artist with future opportunities.

We’re closer to a booth at a crafts fair in that it’s a one-off event, and I just think we’ll get better artists and more of them in if we take less of a chunk of their income. I also think it’s closer to our ethos/values as a space that values and respects the work that goes into crafts for us to give the artists a larger chunk of cash for their work.

I’ve always thought that 50% was too steep for us to get the level of participation we’re hoping for. But if we’re approaching it as a fundraiser rather than something to bring in artists etc I could see the logic behind it. That, however, limits us to artists who already support LMN and are willing to participate in our fundraiser.

I had a conversation with one of my colleagues who runs a jewelry making business on the side about this. She said that if someone wants to take 50% she expects that the piece will be in their gallery or space for months and actively be sold rather than it being a one day event where things may or may not sell. She said that as a maker who does this as a side business she would not participate in this type of event at that cost level because at the end of the day it just not worth it.

I think it depends on our purpose and who the artists are that we’re hoping to attract. At 50% we’re probably looking at something that our own membership will support because they have a vested interest in supporting an LMN fundraiser but will see limited outside participation. At a 20%-30% I think we’re more likely to bring in more artists from outside of LMN but we make less profit on each sale.