As several of you know, the big CNC machine has been giving us some headaches recently. I have a theory now that seems plausible, and will let us try out some “differential diagnosis”. The symptom experienced so often lately by @Joe and today by @sargesfc is a sudden shift along the X axis by a significant amount (several inches). It mostly seems to happen between cutting operations, when the machine is moving at highest speed. I think from memory that all the failures I have seen have been on the X axis.

Various theories have been proposed and rejected (mostly by me). But now I’m thinking it’s a “tired” stepper driver for the X axis. The drivers are high-current devices, and generate a lot of heat. If there’s a marginal power transistor in there, it could be failing during rapid moves, and shutting down for a brief period. There’s no communication from the stepper driver back to the computer at all, so no way to alert the computer that this happened.

I changed the motor parameters to reduce the maximum X axis speed. This shouldn’t affect cutting passes, since they’re much slower than rapid motion between cut passes. This has helped a lot. Right now I’m running and re-running the checkout stool project with a marker pen in the spindle, and it’s repeating perfectly. I’m at six successful runs so far, and I’m going for 10.

Also, I noticed the Z axis settings were identical to the X and Y axes, but that’s not right. It has more work to do, and so I slowed it way down. This eliminated some Z errors I had been getting on my test runs.

The Upshot
We’ll get a new stepper driver ordered, and swap out the current X axis driver. In spite of the motor adjustment, I still recommend orienting things along the Y axis where possible, so that the X axis doesn’t run for long, and has more time to rest between moves. But I’m optimistic that this might get to the bottom of things.

Spindle Temperature Still High
The spindle has started to run hot again. It seemed like when it came back from the local motor doctor it was running cooler, but now it’s getting close to the danger temperature again. Joe has been cooling it with the Shop Vac, which seems to take several degrees off it. Keep an eye on the temperature with the IR thermometer, and don’t get above 150. Let it cool down if you get up there.

We will see about setting up air cooling for it. I believe we have all the necessary parts for that.

thank you Carl for all your great work! take care, Joe

Last night I had 8 successful runs, and then I had the same X-axis shift near the end of the 9th run. By this time the control box was good and toasty warm inside. I think this supports the idea that it’s a failing stepper driver. Slowing the motor speed (and reducing the acceleration) extended the time to fail noticeably.

did two drawer fronts yesterday, worked perfectly! placing the work in the portrait, rather than landscape, position seems like a great idea. Run time for each was 66 minutes. Start time spindle temps were 76 and 88 (waited some time between the two) and final temps were 146 and 142. Used vacuum for air circulation.

did two new drawer fronts today. The second one worked perfectly while the first one stopped about half way through and generated the attached error message. 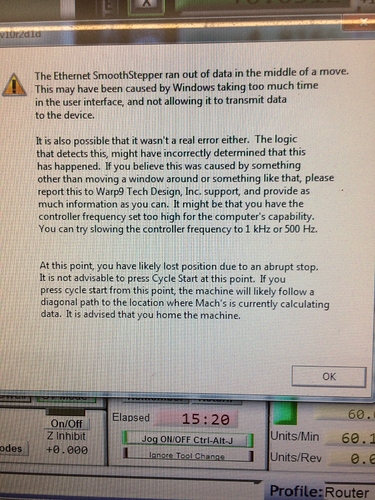